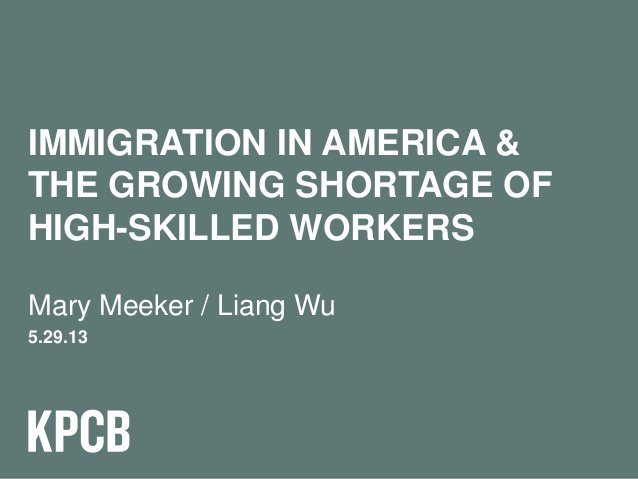 Commentary: Immigration in America & The Growing Shortage of High-Skilled Workers

We came across this Slideshare recently titled: Commentary: Immigration in America & The Growing Shortage of High-Skilled Workers, and wanted to share our thoughts.

In response to this cap, numerous changes to the immigration bill are debated every year by the United States Senate.A 2013 study by Mary Meeker, a partner at Kleiner Caulfield Perkins Byers, and Liang Wu, entitled "Immigration in America and The Growing Shortage of High-Skilled Workers" is concerned about the effect of the current H1-B visa policies, and their impact on both the technological sector and the US economy as a whole. The study argues that the current caps on H1-B visas available each year is at odds with the historic approach to immigration, which is to regard America as a destination and haven for the best and brightest.

The Meeker study specifically addresses the issue of Science, Technology, Engineering, and Mathematics graduates, commonly referred to as the STEM fields. The study argues that STEM graduates provide the backbone of talent for emerging and currently dominant technology and research companies in a worldwide competitive market. A 2008 survey of nearly 30 companies in the technology and semiconductor fields revealed that much of their labor will be either outsourced or moved offshore in response to the diminishing pool of locally available talent.

The number of American graduates in the STEM fields has dropped from 74% in 1985 to 54% in 2006. At the same time, there is an ever-increasing demand for highly-skilled tech graduates, and a job market that is growing twice as fast as other employment fields.

Canada has already taken a progressive step to attract more STEM field graduates by offering easier access to an unrestricted number of residential visas. The study highlights a move by Jason Kenney, the Canadian Minister for Immigration to challenge the US by stating: "Everyone knows the American immigration system is pretty dysfunctional. I'm going to...spread the message that Canada is open for business; we're open for newcomers. If they qualify, we'll give them a green card as soon as they arrive."

Based on the total number of H1-B visa petitions received by the Department of Homeland Security each year, Meeker believes 150,000 places a year could easily be filled in the United States. Moreover, a 2013 poll found that 63% of voters believe the nation faces a shortage of highly-skilled workers, and that immigration policy should encourage those workers to stay in America.

If you would like to learn more about hiring foreign nationals, schedule a demo with Bridge Us.